On May 19th the much-anticipated Witcher 3: Wild Hunt will be released, bringing to a close the franchise’s epic action-RPG story that began way back when in 2007. One month later, another long-running story is concluded in Rocksteady’s equally-anticipated Batman: Arkham Knight, which sees DC Comics’ villains unite to end The Bat once and for all.

Both Batman and The Witcher raise the bar for graphical fidelity, rendering two very different open worlds with a level of detail we could only dream of last decade. And on PC and HTPC, each is bolstered by NVIDIA GameWorks effects that increase fidelity, realism, and immersion. But to use those effects in conjunction with the many other available options, whilst retaining a high frame rate, it’s entirely possible that you’ll need an upgrade.

Now we may be biased, but if you are indeed in the market for an upgrade we’d have to recommend one of our latest award-winning NVIDIA GeForce GTX graphics cards. They support all of the latest features and effects, all of the NVIDIA GameWorks enhancements in The Witcher 3: Wild Hunt and Batman: Arkham Knight (see below for details), transformative technologies like G-SYNC, upcoming game-changers such as DirectX 12, and fan-favorites software features like DSR and ShadowPlay. And from now until June 1st, you can get The Witcher 3: Wild Hunt and Batman: Arkham Knight for free when purchasing one of these graphics cards from participating e-tailers and retailers. Check out the table below to see which GPUs are included, and hit up the “Two Times The Adventure” GeForce GTX Bundle page to see where to buy.

The Witcher 3: Wild Hunt is set in an immense world, and outside of the safe cities and relatively safe towns, protagonist Geralt of Rivia will be confronted by a menagerie of vicious beasties, all eager to avoid the pointy end of his monster-slaying silver sword.

With a suitably powerful GPU, and NVIDIA’s GameWorks effects enabled, many of these beasts will be enhanced with NVIDIA HairWorks, adding hundreds of thousands of dynamic DirectX 11 tessellated hair strands, creating the appearance of real hair and fur.

In addition to enhancing the many beasts of The Witcher 3: Wild Hunt’s open world, HairWorks also increases the fidelity and realism of Geralt’s flowing hair, as well as the mane of his trusty steed, who makes going from A to B a breeze.

When you’re roaming the lands of The Witcher 3: Wild Hunt, on horseback or on foot, NVIDIA GameWorks’ HBAO+ will increase the quality of Ambient Occlusion (AO) shadows on every character, object, surface, and piece of foliage, greatly enhancing image quality game-wide. Compared to other AO techniques, HBAO+ is more accurate and more realistic, and is now the AO solution of choice for leading developers.

In addition to HairWorks and HBAO+, The Witcher 3: Wild Hunt’s world is enhanced with platform agnostic NVIDIA PhysX effects that enable clothes, cloth, ship sails, and horse tails to move as you would expect, and objects to be destroyed realistically. Get an in-motion glimpse of them and the effects in our behind the scenes video. 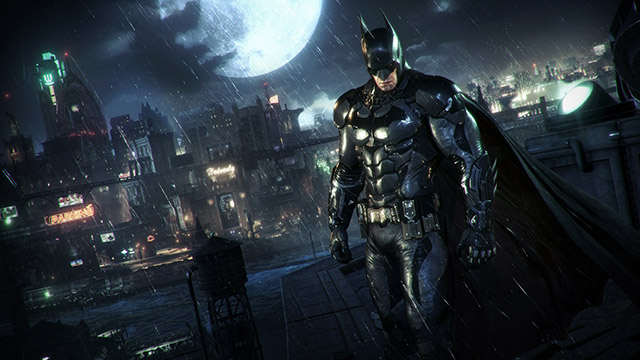 Batman: Arkham Asylum, Arkham City and Arkham Origins all featured cutting-edge NVIDIA GameWorks effects, and for the conclusion of the much-loved quadrilogy we’re pulling out all the stops, working hand-in-hand with developer Rocksteady to create new visual effects exclusively for the game’s PC release.

This is in addition to integrating the latest and greatest versions of our PhysX Destruction, PhysX Clothing and PhysX Turbulence technologies, which work in tandem to create immersive effects that react realistically to external forces. In previous Batman: Arkham games, these technologies created immersive fog and ice effects, realistic destructible scenery, and game-enhancing cloth effects that added to the atmosphere and spectacle. Expect to see similar effects in Arkham Knight, along with new features and effects that we’ll be talking about in depth as we approach Arkham Knight’s June 23rd release.

Configure your Steiger HTPC with Witcher 3 and Batman here: